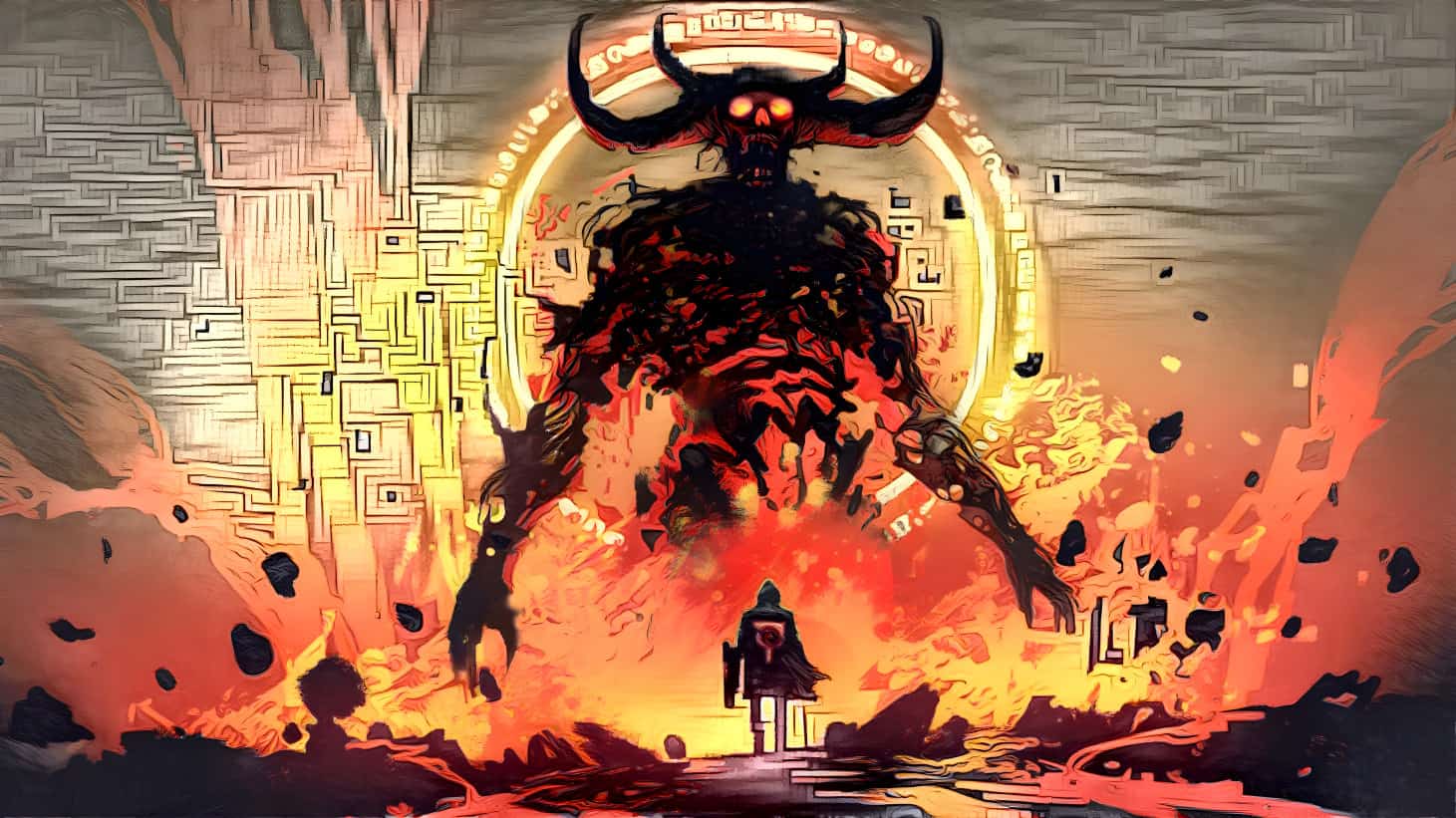 I built a random monster generator that you can access at LitRPG Adventures. On this page, I’m going to show you 10 different examples of the output of this RPG tool.

Ciolec begin as puffy balls of shiny, iridescent orange. They appear to be made of a fabric or leatherlike material that is very porous, almost like open mesh. As a Ciolec develops, it slowly becomes firmer, and will develop finger-like protrusions. These fingers are about the size of a human’s thumb, and are dull red in color. The Ciolec is about the size of a large pumpkin when it grows to adulthood. As it becomes more sturdy, the Ciolec will put its head on its chest and its arms down by its sides. It has two large, red, oval eyes with a black center. It has a large, black mouth that looks like it is smiling. There are very large, black wings on the back of the Ciolec that it uses to fly.

Ciolec are born predators but will not attack until they are old enough to do so. They will begin hunting by gliding down from the sky onto their prey. Their wings are soft and covered in a slippery substance that will help keep them airborne. Ciolec are tough opponents to fight, as they can fly, have a tail with a sharp poison, and can cause damage with their long, sharp nails.

Not very much is known about the Ciolec, as they are very reclusive, and keep to themselves. Their territory is very difficult to get to, as it is surrounded by a sea of acid, and the only “land” is made of razor-sharp crystal. Because of this, very few Ciolec have been able to come up with ways to interact with the rest of the world. Some have tried to destroy their own territory so that they would be able to get to the surface, but all efforts have ended in failure.

Decima is a small, gaunt creature of unusual frame. Her head is abnormally large for her body and her mouth has a slight tilt to one side. From the back it would appear that her neck rises directly out of her shoulders. She has no visible legs, but when she moves it is as if she is gliding along the ground.

She appears to have a long tail but it is just what appears to be her lower torso and the end of her tail is long and thin with a slightly blunted tip. Decima has an extremely long neck. Her head is small, almost doll-like, and her facial features are very delicate. She is covered in dark-gray fur that has a silky quality to it. When Decima is in an excited or angry state, her lips curl back, showing sharp teeth.

Decima is extremely fast and agile, capable of dodging missiles that are shot at her. She does not have a lot of strength, but she is extremely agile, quick and highly intelligent. She often attacks with magic, using her keen intellect to use magic spells to disorient or confuse opponents as well as strike them with lightning bolts.

Decima was once a female human cleric who, in her youth, devoted herself to the goddess of magic. She grew in power to where she could defy her goddess, and after some time she became a goddess herself. Eventually she turned to using her power to twist the laws of nature, creating the Decima, a race of half-spirit, half-human beings. Decima is a master of the dark arts of enchanted magic. She has the ability to create and control a race of beings called the Decima.

She has stayed within the Stormlands recently, showing interest in certain dragon eggs that are currently being controlled and protected by the Blue Dragonflight, as well as some magic items that were stolen by the Blood Elves, and that now reside in a vault beneath the city of Tempest Keep in the Southern Kingdom of Lordaeron.

Qoturk appears as a large muscular wolf, with no fur and dark brown skin similar to that of a zombie. Qoturk has a long snout with large canine teeth, three fingered hands and feet, and three fingered claws. Its head and body are as large as a bear. Its hands are as big as fists, and its claws can cut through steel. Its legs are thick, muscular and filled with muscles.

Qoturk is a large, muscular animal with no fur. The creature has no hair, only thick, black skin that is similar to the skin of a zombie. The creature has the ability to change its shape. Qoturk originally appeared in Gary Gygax’s “The Temple of Elemental Evil” game. Qoturk appeared in the module as a type of monster.

Qoturk has the ability to transform into other creatures. The creature is also very strong.

The creature was created by an evil wizard named Zan, and it quickly got out of control.

A muscular, stocky humanoid with an expanse of brown hair. It has two small arms, two small legs, two small ears and two large, deep-set eyes. It has a definite brow and a strong nose and chin. The skin of the Kixx is olive green and has a tough, leathery texture. It has dark green fur on its arms, legs and body.

The Kixx are a brutish humanoid race skilled at hand-to-hand combat. Their tough skin gives them additional protection against attack. A solitary species, the Kixx communicate through psychic means.

The Kixx evolved on the volcanic planet of Fumundar. These creatures are native to that planet and have no knowledge of Earth or its species.

The Tic is a small dragon-like creature, with a long, thin body and a large, pointed head. It has no arms or legs. Its 4-foot-long body is covered with thin, smooth scales of various colors. Above the head, a pair of large dragon-like wings sprout from the body, and these wings are capable of carrying the creature through the air.

Tics are an odd dragonian species that have not yet developed intelligence. They are very territorial, and will attack any creature that enters their territory. The Tic has very small, weak claws, and will use them only as a last resort. Its main method of attack is to bite and drain the life force of its opponent. Its bite is venomous and would be very painful on a human, but it will take many bites before it actually drains any life force.

The origins of the Tic are unclear but most likely they were created by the Wizard Zan. They were once used as guards but in the last century they have not been seen. Some say they have all died out, but there are rumors of an underground city where hundreds of them are still alive. Other reports indicate that some of them have been sighted in the ruins of the City of the Ancients.

This is a large, pachyderm-like creature that is covered in white fur. It has a long, thick tail and large, wide feet. Its head has a pair of tusks extending outward from its jaw and a pair of small, dark eyes. This creature is a large force to be reckoned with in large battles.

Aequs will charge any enemy with its tusks and trample him or her repeatedly. After it has crushed its enemy, it will then proceed to stomp the victim and try to destroy him or her. Aequs will attack anything seen as an enemy.

Legend has it that Aequs was an ordinary member of the herd of elephants on the continent of Gamhar about 1000 years ago. It was said to be smarter than most other elephants, but it was still just a beast. One day it got a glimpse of a god hidden in the jungle, but it did not know what it had seen. Aequs tried to describe the god to the other elephants, but they did not believe him.

Once deep in the jungle, he had the other elephants all sit in one spot. Then he left them there, surrounding the area. He wandered deep into the jungle, searching for the god he had glimpsed earlier. Finally, he found him. The god was in the form of a saurian dragon. The two stared at each other for some time before the dragon finally spoke. T

he dragon told Aequs about his family’s declining power over the races of the world, and he offered Aequs a chance to join with him. Aequs was stunned, but then he thought about how the other elephants were treated. He decided he would accept the offer, and the two became a team.

Aequs still thought the other elephants were somewhat dim-witted, and he set out to teach them some useful skills to help them survive in the wild. He would teach them to sleep standing up, to stand on their hind legs, and to lash out with their trunk.

This creature resembles a large, bat-like, red-skinned devil. It has a devilish, bat-like body and red, leathery wings that are somewhat smaller than its body. Its gray eyes have black pupils and irises. It has large, white teeth and two black horns on its head.

It attacks with its claws, teeth, and tail.

About the size of a large dog, it is a lizard-like creature, with a long tail and a long snout filled with sharp, pointed teeth. Its head, shoulders, and back are covered in thick, scaly armor. Its body color is a dark green, similar to the jungle it lives in. It has a pair of thin, fan-shaped wings that allow it to glide from tree to tree and to take short flights.

Jyjaco are omnivores, and eat just about anything they can get their scaly hands on. Their favorite food is meat, and they will eat reptiles, mammals, and birds as well as fish. They will attack prey of all shapes and sizes, but they prefer to attack in groups of two to five. They are very good at hiding, and are hard to detect. They have poor night vision, but have excellent senses of smell, hearing, and sight. They have sharp claws that make for excellent weapons of claw-to-claw combat.

This beast is a huge, fish-like creature that vaguely resembles a shark. The upper part of its body is dark blue-green and the lower part is white. Its head is small and its fins are small and stubby. Its large, square-shaped mouth contains sharp teeth. Its large eyes are black, and glow with a slightly red tinge.

As with any large fish, this creature is a powerful swammer and can ‘swim’ through the air with ease. It can bite with great force and can strangle its victims with its rubbery, powerful body. It can even ‘walk’ on land for short distances. It almost always attacks with a bite and a strangle, and then retreats to the water unless it feels it can finish its victim off in the water.

This creature is limited to the ocean. If it appeared in the ocean in the ‘Realms, it would have to return to the Sea of Fallen Stars in Faerûn.

If you want to generate your own random monsters, head over to LitRPG Adventures and become a member today!