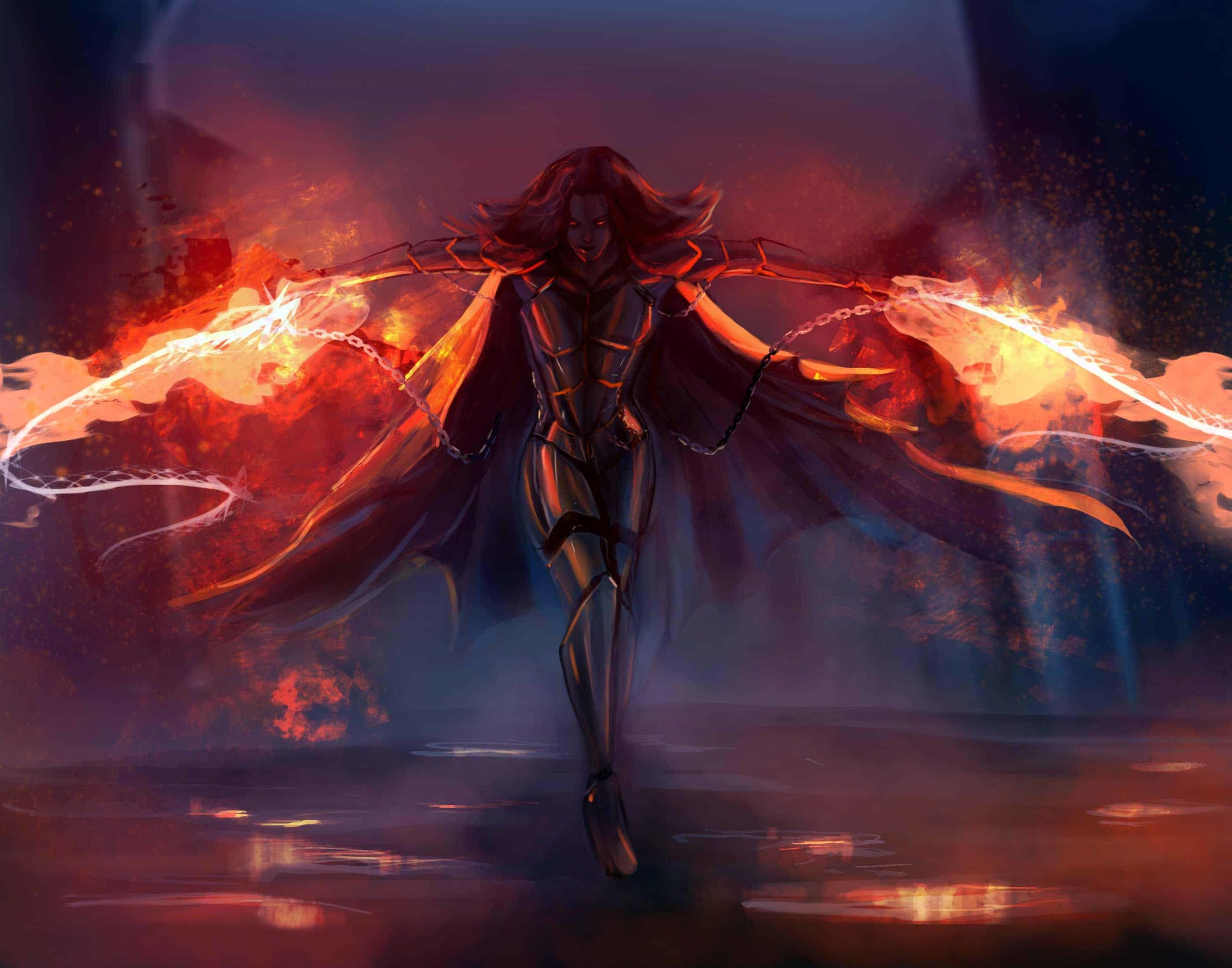 If you’re looking for wizard backstory ideas, I’ve got some good news. Along with the seven different examples on this page, I also have a way for you to generate your own magic-user backstories at LitRPG Adventures. Read through to the end to find out more about my advanced RPG tools powered by GPT-3 from OpenAI.

Ri’sar ieran ia ix was born in the Kingdom of Grabisco. His mother died in childbirth and his father, a Grabisco wizard, died when he was 13. He was raised by a half-elven woman named Syr. Syr taught him everything she knew about the arcane arts, but he found the lessons difficult. He had a hard time focusing, and his mind wandered.

He often got into trouble, and Syr blamed him for the death of his father. One day, he left her home and wandered the kingdom of Grabisco. He was homeless and hungry, searching for a place to call home. He found a place at the Academy of Art and Science in the Kingdom of Grabisco. There, he met a man named Jax. Jax helped him to focus his mind and learn to channel his wild, creative energy into something useful.

Ri’sar ieran ia ix is very intelligent, but he is also very unfocused. He has a hard time focusing on anything for more than a few minutes, and he tends to wander off mentally when he’s doing something mundane.

Ri’sar ieran ia ix is a tall man with long, dark hair and light blue eyes. He wears his hair in an elaborate style and often wears a white shirt and black pants. He carries a quarterstaff.

Throughout his life, Ri’sar ieran ia ix has been searching for a place to call home. He has found that place at the Academy of Art and Science in the Kingdom of Grabisco. He is glad to call this place home.

Born to a family of wizards, Lyra was trained in the arcane arts from a young age. She received a traditional education from her parents, but she also attended the local school for wizards. The school was mostly for show and had no real curriculum. It was primarily a place for students to show off their skills and gain experience.

Lyra excelled at the school, gaining a large following of admirers. Her father was a strict disciplinarian and insisted that she learn to control her magic before she was allowed to leave the school. When she came of age, he sent her on a quest to find the legendary Lantern of Ithillor. It was a test to prove her worthiness to become a wizard.

Lyra is a skilled negotiator and has learned to get out of tricky situations. She is also very confident in herself, though sometimes she’s too confident. She’s not the type to give up easily and will push herself to the brink of exhaustion to complete a task. Even though she’s very confident, she has low self-esteem. She often doubts her own abilities, but she’s also very loyal to her friends.

Lyra is a beautiful young woman with long, dark hair and piercing green eyes. She wears a long green robe with a hood to cover her head. Her weapon of choice is a staff that has a fireball enchantment.

She is looking for the legendary Lantern of Ithillor, hoping to use it to gain entrance into the College of Wizards.

Soveliss is an elf, who grew up in the Grabisco Kingdom, a place where elves have integrated into society. She was raised by her mother, who was a wizard and her father, who was a merchant. She had a happy childhood, and grew up to be a strong and intelligent young woman. When she was of age, she chose to become a wizard.

One day, she came across a young man who was in need of help. She helped him, and they became fast friends. Soveliss and Deven later married and had a child. Deven taught his son how to fight. Soveliss taught her daughter how to cast spells. Her daughter was a quick learner, and was one of the top students in her class. Soveliss was proud of her family.

Soveliss is a kind and caring person who always puts the needs of her family first. She is a strong and confident person who has a sense of justice. She does not like to see people get hurt, and will step in to help those who need it. She values friendship and loves to spend time with her family.

Soveliss is a tall and slender woman who wears her long elf hair in a ponytail. Her eyes are green and she wears a pair of silver glasses. Her clothing is simple and practical, and she is always seen wearing her mother’s medal. She carries a staff, which she uses in combat to cast her spells.

Soveliss is currently adventuring throughout Grabisco with her husband and daughter, hoping to get her mother’s medal back.

Ca’n izgara grew up in Qorynth, a small city in the kingdom of Grabisco. She is a half-elf, her mother being a wood elf from the south. Ca’n was never treated well because she was different, and she found solace in books.

Her thirst for knowledge is insatiable, and she has read volumes that would take years for others to finish. She joined a group of adventurers to find more books and learn more spells.

Ca’n is a little bit of a recluse. She doesn’t like to mix well with others, preferring to be by herself. However, once she gets to know people, she opens up and is friendly and kind.

Ca’n is a tall, thin half-elf with a long neck and pointy ears. She has long, straight black hair that flows down to the small of her back. Her eyes are a little larger than normal and are a deep green with flecks of bronze.

She wears a leather cloak and long leather boots. She carries a magical long sword with an emerald embedded in the hilt. Her eyes are always hidden behind a pair of large, round glasses.

Ca’n has decided to adventure throughout the kingdom of Grabisco and the surrounding lands, intent on finding the books and spells she needs for a fulfilling life.

Fyriel was born to a middle-class family in Prenton, the capital city of the Kingdom of Grabisco. Her father was a merchant and her mother was a homemaker. Fyriel was always a curious child, always asking questions about the world around her. One day, when she was seven years old, she snuck out of her house and walked to the library.

Fyriel is very curious. She wants to learn everything she can about the world. She is friendly and kind. She loves to help people.

Fyriel has long, blonde hair that she keeps in a ponytail. She has blue eyes and wears glasses. She wears a blue dress and carries a satchel.

Fyriel has decided to adventure throughout the Kingdom of Grabisco and beyond, intent on becoming a well-known wizard and defeat the acolytes of Zan.

Looby was born into the goblin tribe of Largess, where he learned the art of magic. He was always intrigued by the endless possibilities of magic, and he often found himself sneaking off to practice the strange things he learned. He was most interested in the art of illusion, and he eventually became skilled enough to fool other goblins. His curiosity was always getting him into trouble, however, and he was often punished by his tribe.

One day, a group of adventurers passed through the kingdom. They were all dressed in wizard robes, and they were accompanied by a strange creature that grew flames from its hands. Looby was intrigued by this creature, and he followed the adventurers to the edge of Largess. When he was sure that he would not be seen, he crept into the woods and observed them.

They were planning to attack a town in the neighboring kingdom, and Looby was determined to follow them. That night, he snuck out of the kingdom and snuck into the town. He attempted to infiltrate the camp of the adventurers, but he was caught. They were surprised by his appearance, but they were intrigued by his curiosity. They offered him a chance to join them on their adventures. He was thrilled to accept.

Looby is a short creature with a large head. He has dark green skin and dark black eyes. He wears a long grey robe with a red trim. He carries a short wooden staff that he uses to cast his spells.

Looby has decided to travel with the adventurers, and he has joined them in their quest to defeat the acolytes of Zan.

Vaerona was born and raised in the small village of Bordon. She grew up in a loving family and she was very close to her brother, Vakkor. When she was 19 years old, she was chosen to be a member of the Order of the Seekers, an elite group of wizards and clerics.

She was trained by the most powerful beings in Grabisco. A few years later, Vaerona was selected to join a special mission to the Kingdom of Draconis to uncover the secrets of the Order of the Seekers.

Vaerona wears a simple blue robe with a hood. She has long black hair that she keeps in a ponytail.

She is currently traveling with her brother, Vakkor, and her friend, Vane, through the Kingdom of Grabisco.

Qoxta was born in Xanthoulian. She was a quiet child, and her father was a military officer who died in battle defending the city from goblin invaders. Her mother was a schoolteacher, and Qoxta was a bright student.

Her mother taught her to be kind and helpful to others, and Qoxta grew up to be a quiet and kind woman. She became a teacher, and she always encouraged her students to follow their dreams. She was a kind and caring woman who always put others first.

Qoxta is a quiet and kind woman who always puts others first. She is an excellent teacher and always encourages her students to follow their dreams.

Qoxta is a short and plump woman. She has dark skin and short black hair. Her eyes are a dark brown. She wears simple clothes that are comfortable and easy to move in. She has a kind and gentle smile.

Qoxta is an old woman who is still teaching at the school she attended as a child. She is devoted to her students and loves them as if they were her own children.

Want to make your own wizard backstories with a click of a button. Head over to LitRPG Adventures today. Members get access to over 2 dozen advanced generators and can access our library of over 20,000 things already generated in our library. I’ve also just launched a new dungeon generator!