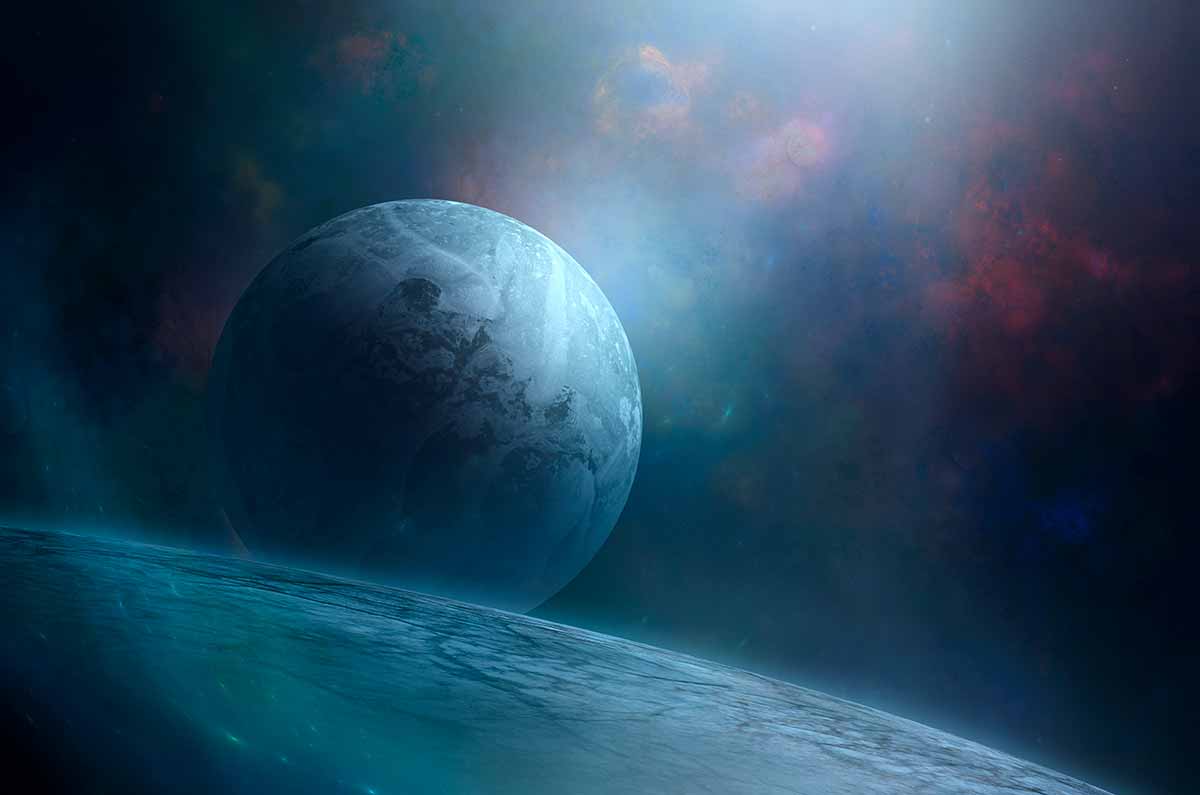 Here’s 10 (mostly) unexplored planet descriptions you can use in your science-fiction tabletop RPG campaign. I generated these planets with GPT-3 from OpenAI then edited them. Yes, advanced AI neural net and me, a squishy human, working together for top-notch Unexplored Planet Descriptions and so much more. Enjoy the list!

Vysohl-3 is a primitive world with a harsh climate. It is a spartan world covered by a great ocean of ice. The planet is covered with a frozen poisonous atmosphere. The atmosphere is made up of ammonia and sodium chloride.

The sodium chloride is similar to the salt found on many planets. The oceans and seas of ice are frozen by a constant wind. The planet is barren and lifeless, except for an intelligent species of small aquatic creatures.

The creature’s society is primitive and harsh. The creatures live off what is found in the world to survive. From the surface the creatures use massive plate sized ships to hunt and to gather material. The creatures maintain a strict hierarchy, though individualism is frowned upon.

The creatures, the only sentient lifeforms on the planet, have no contact with the outside galaxy. They believe they are gods and to outsiders must remain secret.

Vancha-11 is a rocky barren planet which is quite large, roughly the size of Mars. The planet has a thin atmosphere and little water.

This planet is a haven for those who wish to avoid the attention of the Empire. The planet is situated right in the middle of the outer rim and is much less likely to be discovered than the core planets. The planet is mostly uninhabited and the settlements that do exist are small and sometimes abandoned.

Zank-Zor is a frigid world covered in snow and ice. There is one habitable continent on the north pole. The planet orbits around a dying star. This gives the planet a gloomy and dark appearance at all times. The planet is also subject to frequent solar storms.

Dalsime-3 is a huge planet, with over five and a half million square kilometers of land and water (compared to Earth’s total of 147 million square kilometers). The planet is closer to the sun than Earth, with the average yearly temperature is over 11 degrees higher than Earth. The southern hemisphere of the planet is covered in oceans, with most of the landmass on the northern hemisphere.

The planet is covered with tough trees and thick mountain ranges. The northern hemisphere is the only place on the planet where the fauna is dangerous. The planet is so large, it has a sort of lunar effect. The planet has four visible moons and is the only planet in the Solar System to have four and a visible ring system.

The planet is currently used as a political prison. Large portions of the southern hemisphere are used as a penal colony, where people are sent to work off their crimes. The population of the planet is only about one million people.

All of the government takes place on the northern hemisphere, which is where all the land mass is. Over population is a concern for the government.

The planet has four moons, which are visible from space. The main moon is named Akiba.

There are also two smaller moons named Kojira and Taki. Such is life in this part of the Milky Way galaxy.

There is no official government on this planet. The people here don’t want a government or laws imposed on them. They are a small society. They don’t have a standing army. They have a militia made up of a few thousand men and women.

The people here are a quiet and reserved people, but they love a good fight. They hate technology and any thing alien. Their religion says that all alien life is evil. They have few friends and rarely come off their world. The only advanced technology they use is to make weapons.

The planet is a ball of desert and mountains. There are four oceans on the planet Cimber. The oceans have no life in them. Life is hard for the people of this world, but they have it much better then those poor people on Malthus.

Uulbreth is one of seven planets in the Quagmore solar system in sector 3384 on the outer rim. It is an inhospitable frozen world covered in glaciers. Though it contains the only known deposits of stibium, Epsolahm-3 is still an unknown planet.

Life on Epsolahm-3 is chaotic and messy. Smugglers from all over come to this backwoods planet to make deals. Thousands of smugglers and criminals endanger the lives of everyone on the planet. Though the law is rearing its head, smugglers are still in power. The official government has little influence outside of the main cities.

Around 1 million humans and aliens call Epsolahm-3 home. The planet was uninhabited when first discovered. The melting of the polar ice caps led to the creation of the geothermic vent. This vent is the great vein of Epsolahm-3. It is used by smugglers to do business. Epsolahm-3 is a dangerous place at best.

Without proper protection, the atmosphere of the planet strips away clothing and flesh. The planet’s two suns scorch the land with intense heat. Fierce storms hammer land. The planet is cursed by volcano’s and earthquakes.

Font is constantly covered in solar radiation and can not sustain life. Erasmus is a cold lifeless rock. Such is life in this part of the Milky Way galaxy.

Bixat-1, also known as Bixat-9, is a planet in the Epsolahm solar system in Sector 3384 on the outer rim. It is a small planet, with a small atmosphere and high gravity. It consists mostly of rocks and no water. The planet has a small population of a few hundred humans and other species.

It was a base of operations for the Empire during the civil war. A small base with an orbiting satellite is still in operation. The planet has no unique features of note. Though the air is harsh, the planet does support life. The Empire uses it as a base to protect the geothermic vent in Epsolahm-3.

Bixat-1 has no cities, though there is a small mining settlement. The forces on Bixat-1 are spread out over the planet in small bases. The population of the planet is about 500 people.

Bixat-1 is a rocky small world. It is mostly made up of hills, valleys and plateaus covered with sharp rocks. The planet has only one continent, called Bixat. The continent is mostly plains. A small mountain range covers the center of the continent.

Rahn is a brownish-yellow desert world, cool and dry. It’s a very dangerous planet filled with dangerous wildlife. The new galactic government is currently engaged in a long-term war with the native inhabitants of the planet. The planet orbits a single dust ball yellow star.

It is a gateway to the galactic core. Rahn is the only planet in the Rahn system. It’s a small planet, which is about half the size of the Earth, and has a slightly smaller gravity. The planet has a total surface of around 20,000 km * 12,000 km.

A greater portion of the surface is covered in deserts than plains. The planet has one moon, which is named Kaelar.

Rahn has a population of around 3 billion. The planet is currently occupied by the galactic government, and is at war with the native inhabitants of the planet. The planet is at a level of technology similar to that of the 20th century Earth.

The planet has a flat sandy desert land with rocky plateaus and canyons. The most notable feature of the planet is the surface which looks like an ocean of sand. The planet has numerous small oceans.

The planet has a series of large craters. The planet is one of the most extreme environments in the galaxy. It is a dangerous planet to explore.

Kijov is a large planet that has survived the harsh conditions of space and has developed a civilization. Though not perfect. The planet is home to many factions and many conflicts, but the planet is also a paradise, with hospitable conditions and a seemingly endless bounty of resources.

Kijov has a population of around 9 billion humans and aliens.

Kijov is a paradise, at least in most places. The many factions of Kijov constantly wage war on each other. Each faction is attempting to create a world for their people. A Utopian world or a brutal dictatorship.

The planet has a large population of aliens and humans, but a small population of each. Large cities are controlled by a single faction, while smaller cities are divided by many. Kijov has no central government, and the planet doesn’t need one.

Each faction has its own goals and agendas, and each is willing to defend itself.

Though a large amount of land is unused. The planet has a single tiny moon named Kijov’s moon, which is a tiny chunk of rock. There is a large rift valley in the southern hemisphere.

Haldius-3 is a gas giant world in sector 3384 on the outer rim. It gives off the most intense light in the entire Quagmore solar system. Traveling around the planet is nearly impossible due to the intense light. It would incinerate most ships.

No one has ever been to this planet, or has ever been very close to it. The light from the planet is so intense that one would only be able to see the planet for a few minute before being blinded by the light.

Many people believe that it is not worth the risk to travel to this planet. It is an ice world with large storms.

No one knows anything about it, except that the planet casts the strongest light in the entire Quagmore solar system. It is considered an ice world, but that is all that is known.

Nobody knows much about this planet. It’s light is so intense that no one can see it for very long. It is believed to be an ice world, but that is all that is known. The planet is comprised of gas, with ice on the surface. It has only two moons.

Want to generate your own Unexplored Planet Descriptions? Head over to LitRPG Adventures and become a member today. I’ve built over two dozen advanced RPG generators powered by GPT-3 API from OpenAI.