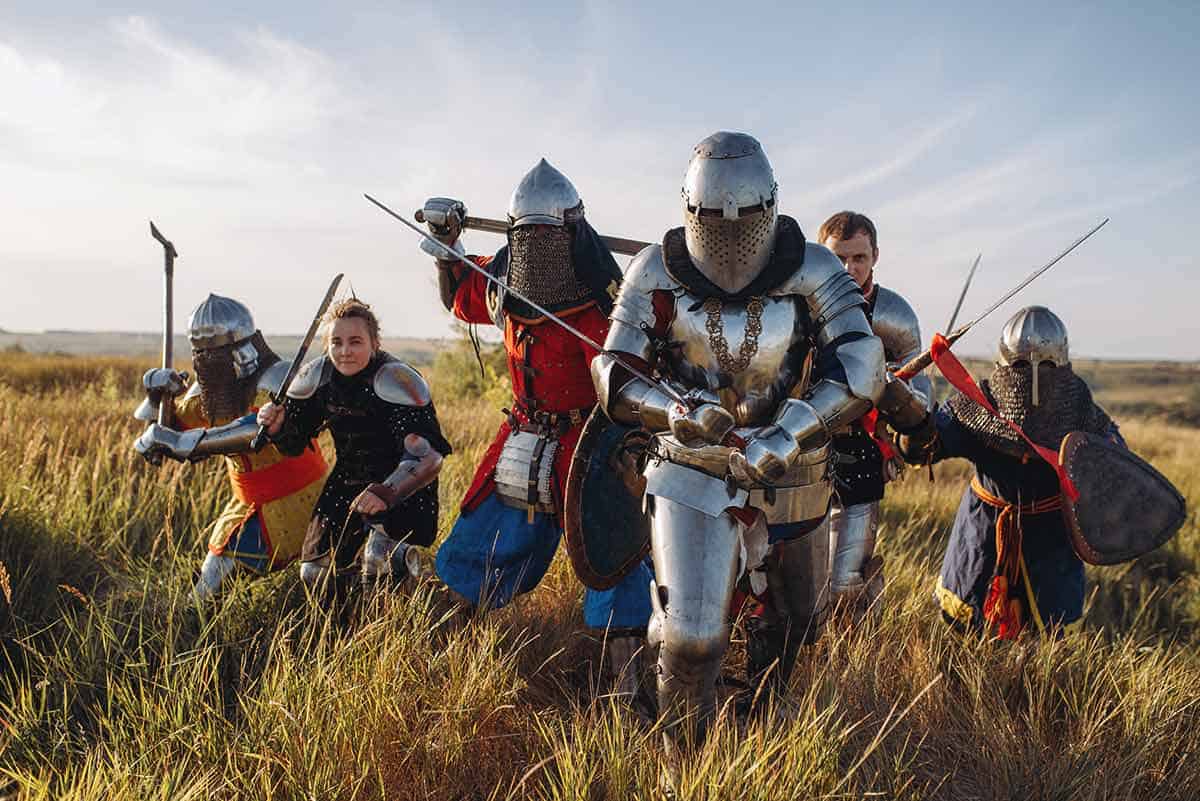 Need paladin backstory ideas? I’ve put together 6 for you. Additionally, I’ve got information about a paladin backstory generator you can use. Read to the end of this page to learn more. For now, I want to bring you ten fun paladin backstories created with GPT-3 from OpenAI. Feel free to use these in your fantasy tabletop RPG campaign. Coming up with a great D&D backstory doesn’t need to be difficult.

In his youth, Qarrad was not the strongest guy around. In fact, he was picked on. His father was a fierce merchant and a bigger man, so he told his son to not let being weaker stop him from being a hero someday. Qarrad was a smart kid and picked up books on combat and strategy at a young age.

He wound up being a half-decent warrior, and by the time he was a teenager his father was a land baron. During this time, Qarrad learned that those who grow up as noblemen often fit a certain mold. He wanted to fit that mold as much as his father wanted him to.

In order to stay fit, he had to work out everyday, and as time went on he became even stronger. He also grew to be a charismatic man, and he was well aware of this. Whenever the time came, he would make a good leader for his people.

Many years later, Qarrad’s father died. No longer a teenager, Qarrad knew his father would have wanted him to take over as land baron. He was proud to do so. A rift formed between him and the priest of the kingdom, however.

Qarrad believed the church wanted to treat people unfairly, so he disbanded it. The king disagreed with this. Qarrad knew he was probably going to be executed for this, so he fled for his life, knowing that if he died his people, the Gerzes clan, would die with him.

He ran away to the hills, learning about his strength and fighting with his sword. Over time, he became a proud warrior, using honor to defeat his enemies.

When Qarrad was a child, his mother told him that he was very handsome. He grew up to be tall and well-built. He has shiny brown hair that he keeps tied back. A scar runs down the right side of his face, but he has learned to love it. He wears a purple cloak to represent his parentage.

Qarrad is currently adventuring with the seven defenders of the kingdom of Grabisco. He is primarily out to find out if the church of Grabisco can be redeemed.

Pertinax is a scion of the Blackfeather clan, one of the most noble families in Xor. He is part of a secret society of paladins that has existed since the time of Grandmaster Beckett. He is the youngest in his line, known for his prowess in battle. His father is an advisor to the Queen of Xor, and his brother is the head of the secret paladin society.

Pertinax was raised with all the proper manners, training in combat and being sent away to test his mettle with his father. He was good in Xor, but has many doubts about his role in this world. Parstinax was sent to the Kingdom of Grabisco, to see what can make him a better paladin. <> Pertinax was born in Xor. He was disappointed when his father wanted him to join the Paladins of Beckett.

He was expected to join the family business and be a business man. He did not like that idea and did not like to use his blade that way either. He did not like the halflings and the idea of dealing with them. The only option for him was to leave and find something better. He was sent to the Kingdom of Grabisco, to see what can make him a better paladin.

Pertinax is a bit sarcastic and likes to joke around. He is a good judge of character and always willing to help. He is a bit of a stickler for what he considers to be proper and incorrect behavior.

Pertinax is an attractive elf with dark hair and full facial hair. He has a lean build and dresses in white cloth robes. His hand is always on his sword handle because he likes to be ready for anything.

Pertinax is adventuring through Grabisco in search of a better purpose in life. He is looking for a sign from the gods themselves.

Get Your eBook Copy Today at Amazon!

Vyandalana has been a paladin for as far as she could remember. Her parents enrolled her in a holy order as soon as she was born. She enjoyed the structured life of the Tempyrian Order. When she was 10, she was enrolled in a training program for young paladins.

She excelled at the physical aspects of the training, but she found the mental exercises a struggle. She worked really hard but the monks were not impressed. She was transferred to a group of recruits much younger than her.

She failed her final exam, and she was sent away. Her parents were ashamed of her and told her to never come back. She left the monastery and the kingdom to find the adventures she’d always dreamed of.

She can be really shy and quiet at first, but once she gets to know people she becomes loud and boisterous. Her least favorite things are cats and chicken. She hates kitties and she’s never eaten chicken. She loves pulpy fantasy novels and is a bit of a nerd. She loves role-playing and games and is always up for a good time.

Vyandalana is a pale elf with long blonde hair and blue eyes. She dresses in loose blue robes and dons a silver pendant around her neck engraved with the symbol of the Tempyrian Order. She always carries her sword with her as she feels naked otherwise.

During training, she had her left pinky finger cut off as a reminder of the pain and suffering she will endure for the greater good. She still feels pain and other sensations in her missing pinky, and she can’t sleep with it under the blanket.

Now that she has left her homeland, she is seeking her first adventure. She is determined to establish a reputation as a badass paladin and prove to the other knights that she has what it takes.

The ogre Tumbalt was born in the City of Ufer in the Kingdom of Grabisco. He was the runt of the litter, but that didn’t stop him from making his mark on the world. His parents cared for him as all good parents would, but, fearing the worst, they sent him to live with another ogre family of similar stature.

The two ogre families were the only ones of the same kind in all of Ufer. Eventually, Tumbalt grew to adult size and became an expert fighter. He proved so adept at all martial skills that the other ogres tossed aside their trusty clubs and shields and invested in swords and heavy armor.

His name spread far and wide through the lands of Grabisco, and his legend continues to grow.

Growing up, Tumbalt lived an isolated life away from the normal ogre culture. He was somewhat of a loner. When his parents sent him to live with another ogre family, he lived alone.

Thus, he grew to be more of a one-man army than a person who relied on others. While he is not completely without compassion, he is more likely to show it to someone who doesn’t ask for it.

Tumbalt is the size of an ogre (7’ tall, 700+ lbs.) with the same basic physical characteristics, but unlike most ogres, he has dark brown hair. His hands are huge, capable of wielding a two-handed battleaxe with ease. He wears a suit of sturdy brown armor that is more than adequate for protecting him in most situations.

Tumbalt has decided to travel the land of Grabisco, looking for great feats of strength to perform. He has heard of a great challenge being offered by the king of the land, and he is all the more eager to prove himself.

Aelleana, of the Black Rose House

A member of a noble house, Aelleana was a kind and compassionate child growing up. She devoted her childhood to the priesthood of Ked, with whom she shares a strong bond. Her family managed to keep her isolated from the politics until she was old enough to leave on her own. As she began to explore the lands of Grabisco, she found that people were not as kind as she thought. She was brought into the service of the Black Rose, a group of warriors devoted to the ideals of the Light.

Aelleana is determined to help those in need. She will fight with all her might to protect the weak. She is patient and humble, approaching with great caution anyone who might seem dangerous.

Aelleana is beautiful, with flowing red hair and piercing green eyes. She wears fine robes and carries a sword. When carrying out her duties, she will don her plate mail.

Aelleana is currently on the road with the Black Rose, helping out where they can. She plans on settling down eventually, but she is young and wants to see the world first.

Get Your eBook Copy Today at Amazon!

Cairn is the son of a violent orc chieftain. He left his tribe as a teen to learn from a group of monks who were masters in the ways of martial arts. While the monks accepted him as a pupil, they would not teach him all they knew, as they felt he was too violent.

Cairn left, intent on proving their lack of faith in him wrong. He used what he learned well, eventually becoming a mercenary to a king. He served a land whose king was a paladin.

However, the king retired from its leadership to become a wandering knight, and a power hungry nobleman conquered the lands, turning them into an oppressive dictatorship. Cairn left the king’s service and went back to his mercenary ways.

He’s been working towards overthrowing the dictator for many months, and he’s finally at the point where he thinks he can succeed. All he needs is enough money to hire a small army and it’s time to wage war.

Cairn is sullen and serious. He does not like to be around people and is rather quiet.

He’s a hulking figure, even for an orc. He has long, dark hair and a full beard. His dark eyes betray a long life of war. He wears little armor and carries only a short sword and a war axe. He uses the axe as a throwing weapon, as well as a melee weapon.

Cairn is in Ledale to drum up support for the Orcish cause. If he can raise enough money to hire a small army, he’s going to wage war against the tyrant and give the people of Ledale and other oppressed people a chance at freedom.

Want to try out my advanced Paladin backstory generator? Head over to LitRPG Adventures and become a member today. You’ll also get access to our thousands of already generated pieces of content. If you play tabletop RPG, you’re going to want to check out this tool.