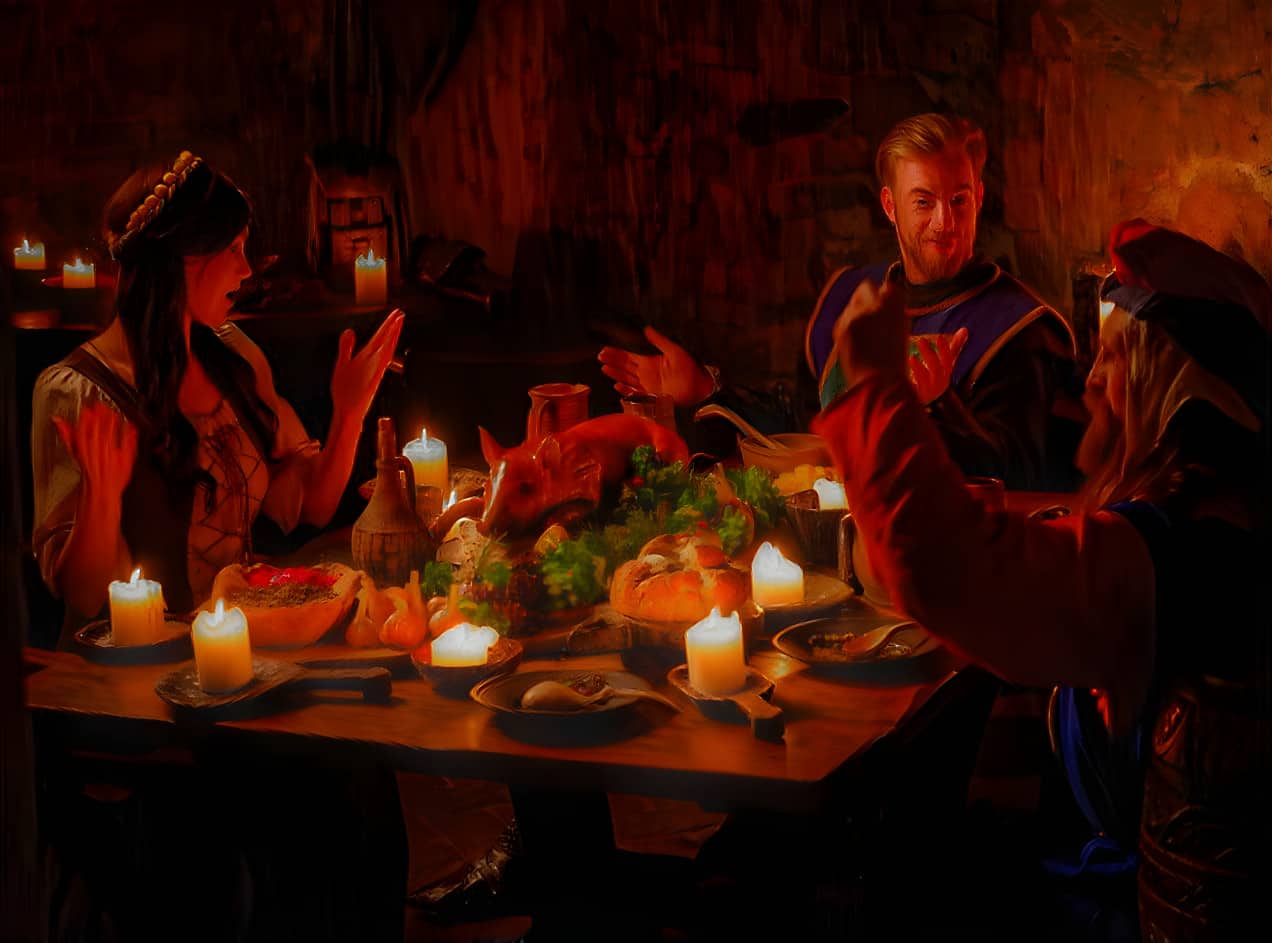 Here’s a handful of DND female bartender names and descriptions generated over at LitRPG Adventures. You can generate your own bartenders and a lot more or browse our growing library of RPG content (see video below!) For now, let’s get to the female barkeeps for Dungeons and Dragons!

Denni is a small and rather pretty dwarfling woman, with long curly red hair and blue eyes. She’s wearing a simple red dress with a low neckline.

Denni was born in the city of Kelethin, on the planet of Faydwer. Her parents were both barkeepers, and she grew up helping them in the family business. When she was old enough, she left home to seek her fortune. She eventually ended up in the city of Crowthorne, where she took over the Running Hare tavern. She’s been running the tavern for the past few years, and has made a decent living. She’s well-known in the city, and is friends with many of the locals.

Denni is a skilled barkeep, and can make a variety of drinks. She’s also a decent singer, and often performs for the guests at the tavern. She has no combat ability, and is not a skilled healer.

Xula is a very large half-giant, standing at just over 9 feet tall. She has dark brown skin and long black hair. Her eyes are a bright green, and she has a very large nose. She is very muscular and has a deep voice. She is usually seen wearing a green tunic and brown pants. She also wears a gold necklace with a large green gem.

If players approach her at her tavern, The Green Dragon, she will be very friendly and welcoming. She will offer them a free drink, and will tell them about her tavern. If pressed for information, she will tell the players that she knows nothing about the recent murders in the city. She will also tell them that she thinks the city guard is doing a good job, and that they should leave the investigation to them. Overall, Xula is very friendly and hospitable. She is also very confident in her tavern and her ability to run it.

Xula was born in a small village in the foothills of the Mountains of Moria. Her parents were both half-giants, and she was the only child in the village. When she was five, her parents were killed by a group of orcs. She was able to escape and fled to the city of Crowthorne. She eventually started working in a tavern, and eventually saved up enough money to buy her own tavern, The Green Dragon. She has been running the tavern for the past ten years, and it is one of the most popular taverns in the city.

Xula is a skilled barkeep, able to make a variety of drinks. She is also a skilled fighter, and is proficient with a variety of weapons. She has no magic ability.

Kerena is a Satyr with short black hair and brown eyes. She has a slender build and is shorter than most Satyrs. She wears a green dress with a white apron.

Kerena is a friendly Satyr who loves to chat. She will talk to the players about the latest gossip, and will offer them a drink if they are friendly to her. She is easily distracted, and may forget what she was talking about if the conversation takes an unexpected turn.

Kerena was born in the forest of Shadows, and was raised by a family of Satyrs. She grew up knowing the forest was a dangerous place, and that the Satyrs were the only ones who could protect her. When she was old enough, she left the forest and made her way to the city of Crowthorne. She found work as a barkeep, and has been working in the city for the last few years. She has made many friends in the city, and is known for her friendly nature.

Kerena is a skilled barkeep, and can make a variety of drinks. She is also a fair cook, and can prepare simple meals. She has no combat ability, and is not skilled in any other areas.

Vara is a Hill Giant, standing at almost 8 feet tall. She is very overweight, and her skin is a light gray color. She has long black hair, which she keeps in a messy bun. She has small, beady eyes, and a wide nose. She wears a stained apron over her dress, and is always carrying a tray of mugs.

Vara is very outgoing, and will try to engage the players in conversation. She is very friendly, and will offer the players a free drink if they are polite to her. However, if the players are rude to her, she will become very angry, and will throw them out of the tavern.

Vara was born into a family of Hill Giants. Her family owned a tavern in the city of Crowthorne, and she grew up working in the tavern. When she was in her early twenties, her family was killed by a group of adventurers. She barely survived, but she became determined to carry on her family’s legacy at The Broken Break tavern. Over the years, she has made a decent living with the tavern. Her reputation in the city has improved, and she’s on the mayor’s short list to be the next head tavernkeeper of the city. Her tavern is known for its cheap drinks and its relaxed atmosphere.

Vara is a skilled barkeep, able to keep the tavern in order and make sure the customers are happy. She is also a skilled cook, able to make a variety of meals. She has no combat ability, and is an average healer.

Even More Female Bartenders for DND

Here’s a look at what members of LitRPG Adventures get access to when they subscribe for as low as $3/month.