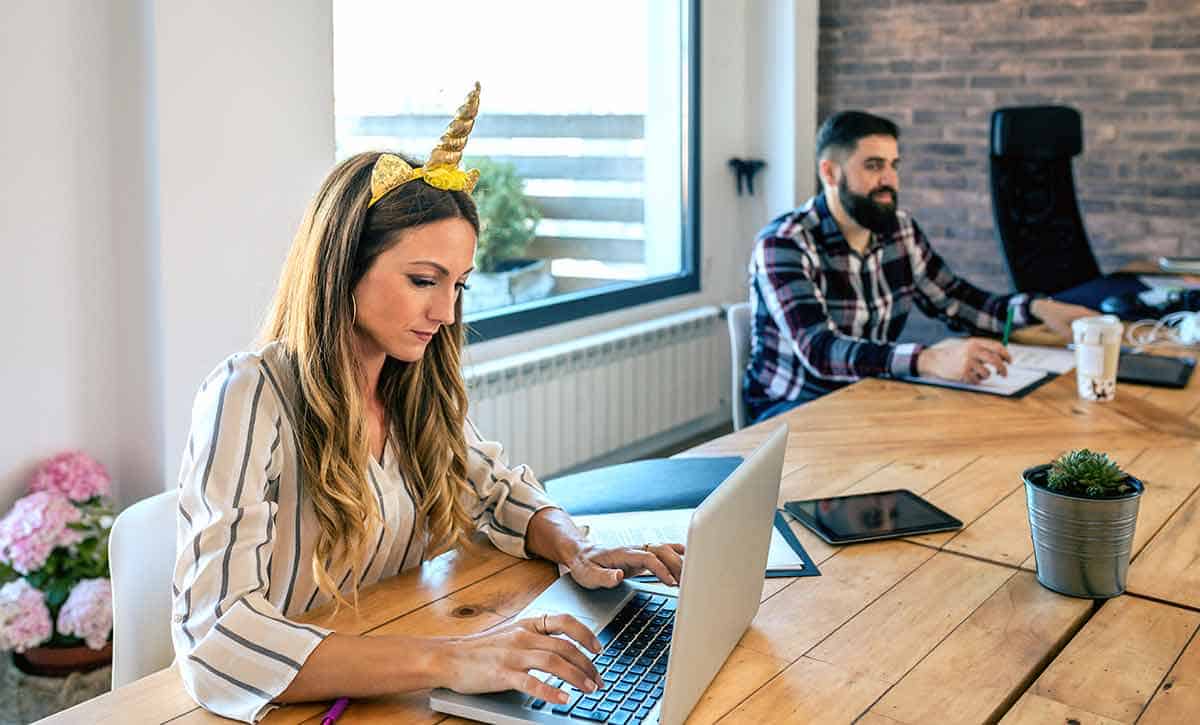 This is a list of odd things found in a modern office that you can use for your tabletop RPG campaign.

1) A stack of receipts that show how the company is spending way too much money on office supplies, but also show that last year’s budget would not have covered the cost of this year’s purchases.

2) A shelf with a number of books on it. You can’t really see what the titles are, but you know that there’s a book about Java and one about XML and there’s probably one about .Net.

3) A list of “Top 5 reasons not to use Microsoft products” in the employee lounge.

4) A locked filing cabinet containing a stack of backup tapes with a bunch of files in a format that none of the employees in the company can read. You’re pretty sure that they’re either old localizer files or old source code, but you’re not sure which. They look like they’ve been there for maybe 20 years.

5) A desk with a desk phone and a desk calendar. The desk phone is on, and it rings once per minute, but nobody ever answers it.

6) A stack of old bottles of soda that nobody ever drinks.

7) A stack of papers on which you can see the ghosted image of a person sitting at the desk.

8) An electrical outlet that has been taped over with duct tape.

9) A keyboard with all the letters rubbed off it.

10) A poster on the wall that says “Everything I need to know, I learned from playing video games.”

12) A giant framed poster on the wall that says “Another Day Another Dragon” and has a picture of a dragon and a lion and a snake and a tiger and a bear and a wolf and a huge, gothic-lettered word that you’re pretty sure is supposed to be something about the word “day,” but which you’re not sure because the poster is poorly framed.

14) A poster of a guy in a dragon suit pointing to a ball of fire labeled “Legal Fees.”

15) A framed picture of a bearded guy playing a guitar.

16) A spare computer monitor that nobody ever uses.

17) Folders full of business cards from people that you never talk to any more, but nobody has thrown away because nobody knows who they belong to.

18) A framed picture of a guy in a dragon suit playing a guitar.

19) A small stack of paperclips that appear to have been stolen from the hotel across the street.

20) A framed picture of a bearded guy playing a guitar.

22) A book on software project management that you bought five years ago and still haven’t read.

23) A pad of sticky notes. The top sticky note has a bunch of numbers on it, and a person’s name. The sticky note has been on top of the pad for a long time, because it has a lot of dust and other crud on it.

24) A computer monitor. The monitor is turned on, but it is displaying a frozen image of a bunch of lines and dots.

25) A vase containing a fake flower. The fake flower is a perfect copy of a real flower, but made from plastic. And it does not smell.

28) A unicorn horn that is worn by various employees according to a hectic schedule not any one person entirely understands. Nobody is quite sure where Lucky Magic Unicorn Horn came from, but nobody in the office wants to get rid of it either.

29) An electric pencil sharpener. The pencil sharpener is on, but it is not sharpening any pencils. It has not been used in a long time. There are pencils sharpened by it that are now covered with dust.

30) A set of bookshelves filled with fake books.

33) A small glass container of mints.

34) A big glass container of mints.

35) A small glass container of candy.

36) A big glass container of candy.

41) A small stack of paper by a computer. You notice that the paper is covered in writing. Apparently, Jan from accounting wrote a diatribe about how the company’s current hiring and training practices will result in a great deal of customer dissatisfaction and a decrease in the company’s market share, and that if the company does not stop its current practices, she will quit, and that she expects to be read, and that the company needs to get its act together and start responding to its customers! Other employees have corrected her grammar on the note and wrote crude responses.

42) A leather bag, open. It contains a lot of glass vials. Each vial contains a liquid. The liquid in each vial is a different color.

43) A toy robot. The robot has a tiny screen with a tiny keyboard. It is running an operating system. The robot is running a program that includes a terminal that you can use to communicate with the robot.

44) A glass fish tank full of water but no fish.

45) A picture of a person’s head. It is stuck to the wall with some sort of epoxy. Someone wrote “Bad Employee of the Forever!” in black magic marker on the wall above it.

48) A young female employee. She has a headset on. She seems really happy about some aspect of the new server deployment.

49) A red stapler with the name of the company on it.

50) A vending machine. The machine contains a lot of beverages. Mmm. Sugar water! And sugar tea!

52) A chair that has the number 2 duck-taped to the rear. It appears to have been used in some sort of office olympics and sits abandoned in a hallway, nobody willing to claim the lonely office chair.

55) An orange bottle of Meat Milk, a nasty protein shake Clarence on the second floor is trying to sell. He’s in deep and has has missed one rent payment and is trying to use the Meat Milk as an excuse to avoid being evicted. He’s also trying to sell Meat Milk to his coworkers.

56) A lamp in the shape of a dog. The dog has a red collar with a silver tag. Sitting on the dog’s head is an orange light.

58) A stack of blank paper. The paper is stacked in six piles of two inches each. It’s a bunch of reports that Cindy ran even though nobody asked her to run them. She loves reports. She loves typing them out. She loves the way the numbers look. Maybe she fancies herself an accountant, who knows. Whatever it is she did, she got new paper before she did it.

59) A large ziploc bag of rubber bands. The rubber bands are of all different sizes, but are all of the type that are found on bread bags.

64) A desk. The desk is filled with a sea of papers, enough to fully cover the desk and still leave the raised wooden lip bare. A chair faces the desk.

66) A collection of 12 raffle tickets. Each ticket has a number on it. The tickets are for a raffle that was held a few months back to win a trip to New York. The raffle was held by the firm to reward its employees for their hard work. Everyone had to use their own money to buy a ticket.

67) A small plastic bag filled with a vile smelling powder. The powder has a sticky feel to it. The powder is a tan color. The powder smells worse than anything you’ve ever smelled in your life. It must be Frank’s.

75) A stack of newspapers on the floo leaning against the wall. There is an open newspaper on the floor. The newspaper is open to an article about the CEO that passed away.

76) An empty coffee cup from two days ago. The coffee in the cup is cold. There is a candy in the coffee cup.

77) A cup of coffee from a week ago. The coffee in the cup is black. There is a candy in the coffee cup.

78) A cup of cold coffee from a week ago. Todd from accounting must have forgotten his coffee cup when he went to the water cooler.

79) A PB&J sandwich in a wrapper. The peanut butter is on the outside of the sandwich. The sandwich is on a table in the corner of the hallway.

80) A Styrofoam cup in the trash can. There are some crumbs in the cup. The cup is filled with water too.

81) A crumpled up piece of paper on the floor.

83) Two half-eaten apple cores are on the floor of the hallway. The apple cores look like they are probably from yesterday, but you’re no detective.

84) An empty candy wrapper is on the floor of the hallway. The candy is called “Whipper Snapper” and is apparently made from 100% real toothpaste.

85) A long piece of hair on the floor of the hallway. It seems like it belongs to Kelly, but definitely not.

86) A box of paper clips on the floor of the hallway. The box is open. Some of the paper clips are missing.

87) Three empty soda cans on the floor of the hallway.

88) A bag of potato chips on a table in the breakroom. The chips are called “Flaming Hot Spudz” and are a discontinued flavor.

90) A copy of a design contest that was held in the office a few years back. The contest is called the “Design That’s Darn Good” contest. It’s a contest to find the best design in the office.

91) An empty soda can in the breakroom. The soda is called “Rocky Cola” and is a discontinued flavor.

92) A pea in the breakroom. The pea is on the floor. The pea is black and looks very unappetizing.

95) A CD from the band “The Smashing Pumpkins.”

97) A cup of cold coffee from yesterday at the coffee machine. The coffee is from a box of coffee labeled “Early Morning Roast,” a discontinued flavor.

98) A box of discarded candy from a party four years ago.